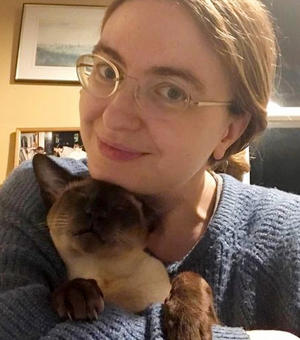 Audrey Borowski is a doctoral candidate at the University of Oxford, completing a thesis on the German polymath Gottfried Wilhelm Leibniz in his intellectual and social milieus in the years 1672–79.

Audrey's interests range widely from the Early modern period to the 21st century, from Leibniz to Catastrophe and the Philosophy of Artificial Intelligence.

She has actively encouraged intellectual exchange by organizing, among other things, the ‘Crisis, Extremes, and Apocalypse’ research network at The Oxford Research Centre in the Humanities (2016–17), the ‘Early Modern Mind’ seminar at The Queen’s College, Oxford (spring 2018), the ‘Universal Histories Research Seminar’ at Queen’s (with Nicholas Halmi, winter 2020)—selected papers from which will be published as a special issue of the Intellectual History Review—and in autumn 2020 a ‘Hans Blumenberg Seminar’ on Zoom with speakers from a half-dozen countries.

‘Friedrich Meinecke or the Defeat of Cultural Historicism’, appeared in the volume Historicism: A Travelling Concept (published by Bloomsbury in October 2020)

‘Sentencing the Present: Critical conversations in a time of crisis’, Public Seminar (28 May 2020)

‘Cousin de Grainville or the Impossibility of Thought’, Blog of the Journal of the History of Ideas (January 2019)

‘Louis-Sebastien Mercier Revisited’, Blog of the Journal of the History of Ideas (August 2018) <jhiblog.org/2018/08/01/louis-sebastien-mercier-between-prophetic-and-historical-engagement-with-time>