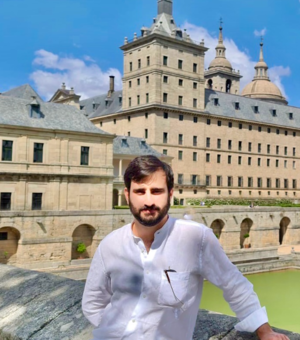 Eduardo is an interdisciplinary student with interests ranging from anthropology to manuscript studies and covering religious history, art, and literary studies.

Conference papers and publications will be made available at academia.edu in due course. Eduardo can also be found at ORCID.

Eduardo is committed to sharing his project and discoveries with those beyond the academic environment. He believes that History can be of immense use for the present, in particular concerning the wellbeing of religious, social, and ethnic minorities. To that intent he is currently involved with the media.

To contribute to the commemorations of World War I's centenary, Eduardo also curated in May 2019 the mini-exhibition 'War and Religion' at Soldiers of Oxfordshire Museum.

Eduardo read History at King's College London (2014-2017), his first dissertation dwelling on the diplomatic impact of the Gregorian Reforms in the final protocols of English and Castilian royal charters and his second on the place of Lollardy in early English Protestantism (1520s-1530s). He then pursued a Master of Studies (MSt) Medieval Studies (2017-2018)  at St Catherine's College, Oxford, exploring the Eucharistic 'affiliations' of early academic Wycliffism (pre-1414).

He has been in receipt of numerous awards, such as the Santander Academic Travel Award (2020), the Vice-Chancellor's De Osma Studentship (2020–21), and the Faculty of Medieval and Modern Language's Isaiah Berlin Fund Bursary (2021). Eduardo has recently been awarded a Jewish Historical Society of England's Award (2021).

In October 2017 the University Council elected Eduardo an Associate of King's College London (AKC). As of August 2021 he is a member of the Jewish Historical Society of England.