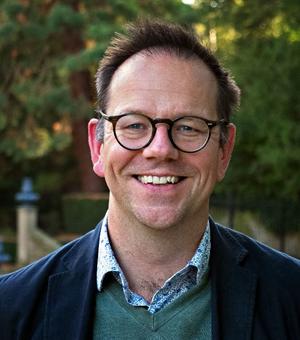 I am the Edward Orsborn Professor of US Politics & Political History and the Director of the Rothermere American Institute. I was born in the Northeast of England and went to Durham Johnston Comprehensive School and then to Oxford, Sheffield, Harvard and Cambridge universities. I taught for sixteen years at UCL before taking up my current position at Oxford.

My specialism is the American Civil War, its causes and consequences, but more broadly I am interested in democratic politics in various settings.

I regularly present documentaries on BBC Radio and write for various magazines and websites. (You can read some recent articles here.) I also a close interest in school history teaching, having previously worked on education policy for the Royal Historical Society, and having previously taught an undergraduate course in which students created and delivered a sequence of lessons to Key Stage 3 pupils.

My principal area of research explores the relationship between ideas and political behaviour. My aim in recent books and articles has been to offer an analysis of political change grounded in how ‘ordinary’ people in the nineteenth century experienced and understood their world. My first book, No Party Now (Oxford University Press, 2006), analysed the tensions between wartime pressure for conformity and the practice of electoral politics. In 2017, the University of North Carolina Press published The Stormy Present: Conservatism and the Problem of Slavery in Northern Politics, 1846-1865, (2017). This book won the Jefferson Davis Prize, awarded by the American Civil War museum in Richmond for the best book on the Civil War era, and was a finalist for the Lincoln prize for the best book on Lincoln or the Civil War soldier, awarded by Gettysburg College and the Gilder Lehrman Institute for American History. It offers a new view of the northern path to war, focusing on the mass of northern voters who self-defined as ‘conservatives’ and whose shifting responses to the unfolding political crises shaped events more than is usually appreciated.

Another strand of my research focuses on the study of the image of the United States around the world. On this theme my most recent publication is an article about the ‘cult’ of Abraham Lincoln in interwar Britain, which appeared in the journal Twentieth Century British History. I am currently completing a book for OUP on the battle of Gettysburg in history and memory which, among other things, situates the meanings of that great battle in a transnational context. I also have academic interests in the history of theatre and in transatlantic liberalism and conservatism in the nineteenth century.

The Stormy Present: Conservatism and the Problem of Slavery in Northern Politics, 1846–1865

The Stormy Present: Conservatism and the Problem of Slavery in Northern Politics, 1846–1865

In this engaging and nuanced political history of Northern communities in the Civil War era, Adam I. P. Smith offers a new interpretation of the familiar story of the path to war and ultimate victory. Smith looks beyond the political divisions between abolitionist Republicans and Copperhead Democrats to consider the everyday conservatism that characterized the majority of Northern voters. A sense of ongoing crisis in these Northern states created anxiety and instability, which manifested in a range of social and political tensions in individual communities.

I have written and presented a number of radio documentaries. Highlights are here:

The Battle for the US Constitution

The Battle for the US Constitution

The Day of the Locust

The Day of the Locust

How Do Children Learn History?

How Do Children Learn History?

I’ve also been a contributor to many other radio programmes, including In Our Time, The World At One, From Our Own Correspondent, Front Row, The Today Programme, Woman’s Hour, Making History, and Things We Forgot to Remember–all on Radio 4; and to Night Waves on Radio 3, and The History Hour on the BBC World Service. I was also interviewed for a BBC Radio 2 documentary on the music of the Civil War. I’ve contributed to various podcasts including The Spectator and History Extra.

My TV work includes a contribution to documentaries about the “lost ship” of the Mojave Desert and a blockade runner built on Clydeside that played an important role in the American Civil War. I’m the presenter of a forthcoming documentary for the BBC on Ronald Reagan’s last movie, The Killers. And I’ve made a short film for UCL about the Fourteenth Amendment to the US Constitution.

I have presented two TV documentaries:

From Out of Town

From Out of Town

I have supervised 9 PhD/DPhil students working on nineteenth-century US history, on topics including the role of music in election campaigns, the Young America movement and the ‘environmental imagination’. I currently supervise Andrew Short who is completing his dissertation on Presbyterian missionaries in the American West. I would be happy to hear from any potential DPhil student who wishes to work on nineteenth-century US history.

I am also available to supervise Masters dissertations on nineteenth-century US history.