The Conditions of Intellectual Work

Let’s discuss stuff to think about. I literally mean stuff - material and materiality which enables thinking, knowledge production, and distribution. Books, paper, book bindings, pens, ink, feathers, parchment, fragments of parchment re-used in newer books, or the spaces for this stuff - the libraries, archives, reading and writing rooms, furnitures such as book cases, desks, cabinets, or book wheels (a favourite of mine).

In the last few years, fruitful and exciting new research has asked about the physical reality enabling abstract thought. Scholars, political thinkers, and public intellectuals avant or après le lettre are not anymore envisioned as brains on a stick. They are not only studied within their discourses (which is already a great counter-narrative to the ideal of the lonely genius promoted in the nineteenth century), but studied within their material world. Or, even more, the thinkers are not so much studied anymore, but research has focused on the conditions of intellectual endeavours. 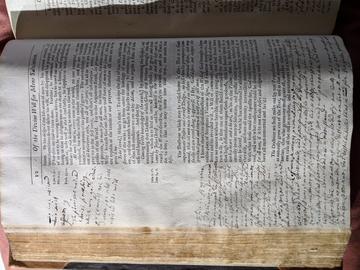 Projects like the Nordic Latin Manuscript Fragments (Routledge, 2019) which discusses the re-use of medieval manuscripts in early modern book-bindings based on a collaboration of the Nordic countries (Norway, Denmark, Iceland, Sweden, Finland) showed the widespread circulation of medieval books and parchment in Europe (there is even a website to play around with some of these fragments). In the early modern period, paper production was one of the necessary foundations for text production. The cheaper production of paper compared to parchment (or vellum if made from calf skin) together with Gutenberg’s printing press enabled a mass production and circulation of texts hitherto unknown, or only available in much more complicated ways as the Nordic manuscript fragments project shows. Recent works on the Paper Trade in Early Modern Europe (forthcoming with Brill), or early modern Books in Motion, and the paper market in Amsterdam (German: forthcoming in Dutch) are analysing the materiality which made the intellectual movements of humanism or enlightenment possible. The Republic of Letters, wonderfully mapped by the Stanford university project, would have not been possible if scholars did not have paper, pens (in the abstract sense) and ink. Also, having a postal system established due to more intense trade helped (Wolfgang Behringer: Im Zeichen des Merkur, 2002). The Oxford projects collecting Early Modern Letters Online or investigating Cultures of Knowledge analyse historical material mostly enabled by the growing paper production and intensified paper trade.

Looking at the conditions of knowledge production and intellectual exchange is also one of the starting points for the newly established Lund Centre for the History of Knowledge which focuses on the contents, forms and meanings of knowledge in society and in everyday life. Similar, the section on History of Knowledge at the German Historical Institute in Washington, D.C. emphasizes the production and circulation of knowledge. For me, “kunskapshistoria” (Swedish) or “Wissensgeschichte” (German) – in English, the history of knowledge is a very welcome addition and new field for intellectual history. It brings together intellectual history with the rich research on book history, media history, or translation studies, and shows how much intellectual activities were also dependent on materiality. Having cheaper paper instead of expensive parchment not only enabled you to be more generous with your writing - not having to use every available space on a page - but also made widely spread ideas possible. 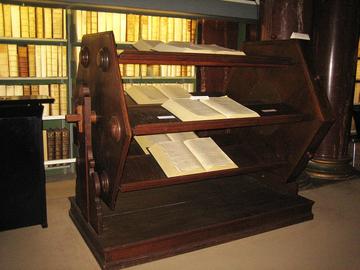 After the fall of the Star Chamber in 1641, the publishing output within England skyrocketed. Any and every idea was published; political groups gathered around such ideas, discussed them in even more publications, disagreed with each other, published new - often more radical - ideas, and formed splinter groups. Within these splinter groups, the same happens again - easy and cheap publication combined with a loss of any form of censorship led to discussions of more and more radical and outstanding ideas. In the end, the Levellers wanted popular sovereignty - this was a long way to go from the discussions in parliament and between parliament and king in the beginning of the wars. Broadening the view, thinking about the influence on political thought of materiality, censorship, and general conditions of knowledge production, circulation, and reception/consumption (also known as the history of reading) is a fruitful way forward to understand contemporary thought more deeply. For eighteenth century France, reading the books from Robert Darnton, among many others The Literary Underground of the Old Regime (1982), The Forbidden Bestsellers of Pre-Revolutionary France (1996), or Censors at Work: How States Formed Literature (2018), are revelations on what is possible.

To sum it up, what are possible futures for intellectual history? Looking at the literal stuff enabling intellectual exchange seems to push research further, adding to the fruitful studies on discourses, wider networks, and intellectual influences of intellectuals. Knowledge work, following the news in this last extraordinary year of 2020, depends on its conditions, and it does matter if we are working in an office environment, if we regularly meet like-minded people to chat, if we have access to libraries and archives, or if we are all sitting alone at home. Our work changed due to the new limitations to established work modes, it is reasonable to assume that the same is true for intellectual work and workers in the past.