Henri de Rouvroy Comte de Saint-Simon (1760–1825) has been called a great many names: a pacifist, feminist, socialist, technocrat, theologian. The inconsistency of his writing, the restlessness of his life, and the eccentricity of his monkish disciples all invite such widely divergent interpretations. Saint-Simon had fought in the American Revolution in the 1780s, was one of the earliest proponents of a Panama Canal, devised a scheme to sell the metal in the roof of Notre-Dame Cathedral, considered Isaac Newton a saint, and published a journal with the sociologist who coined positivism, Auguste Comte. He was also an early proponent of technocratic internationalism—a set of ideas about the economic and political integration of the world through the leadership of scientists and capitalists. Surprisingly, intellectual historians have paid little attention to this significant dimension of Saint-Simon’s political thought. Doing so bears the promise of better understanding the intellectual history of technocratic international thought and practice. 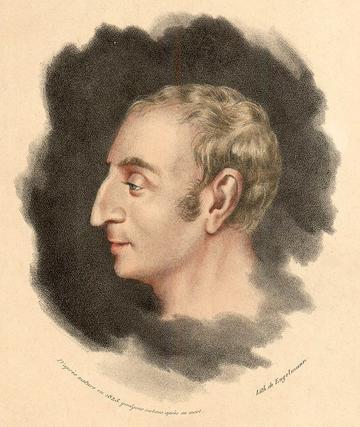 1825 Portrait of Saint-Simon by Godefroy Engelmann

Historians of socialism have claimed the French political thinker as a pioneering utopian socialist. Once Friedrich Engels had dropped the name in his 1880 Anti-Dühring, the verdict seemed final: Saint-Simon was a proto-socialist. It turned into a mantra in the 1950s and 1960s. Thinkers as different as Élie Halévy and Friedrich Hayek invoked Saint-Simon as a formulaic footnote, all agreeing that he had ‘anticipated’ utopian socialism. An alternative reading sees Saint-Simon as a technocrat, pointing to the anti-democratic overtones of his sketches for a future society ruled by scientists and engineers. The Italian economist Vilfredo Pareto (1848–1923) regarded Saint-Simon in this vein as an ideologue who simply sought to give his ideas a ‘scientific veneer’ (1902/3, Les Systèmes Socialistes). Friedrich Hayek similarly gave Saint-Simon pride of place in his 1952 Counter-Revolution of Science as an exponent of the ‘scientistic’ view. A 1972 paper by Robert Carlisle,' The Birth of Technocracy’, added to Saint-Simon’s technocratic credentials. A few years later, Michel Foucault echoed Hayek with a damning verdict that drew a line of continuity from Saint-Simon to Adolf Hitler (1978-79, Naissance de la Biopolitique).

Both interpretive camps occasionally note Saint-Simon’s international orientation, but do not recognize this as an inextricable part of his technocratic thought. As a result, his internationalist face has received scant attention (exceptions: Mazower 2012 and Kaiser and Schot 2014). This is surprising because Saint-Simon was very much alive to the changing international order in his lifetime. His first publication (1802, Lettres d’un habitant de Genève) was written from exile in Geneva; his second (1814, De la réorganisation de la société européenne) was a proposal for European unity addressed to the Congress of Vienna. Furthermore, Saint-Simon’s technocratic thought was always international. His 1802 proposal was composed as a Newtonian rendering of the Abbé de Saint-Pierre’s earlier plans for perpetual peace. Saint-Simon’s 1814 plan for a united Europe demanded international harmony in spirit, made possible by the collaboration of the savants, who he tended to define as highly educated, male property-owners. 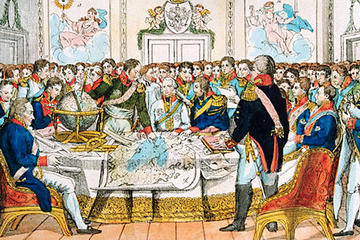 The leaders of Europe in debate during the Congress of Vienna, 1814-15

Saint-Simon’s technocratic internationalism can be characterized on three key dimensions. First, as Saint-Simon noted in Du système industriel (1822), his internationalism relied on industrial capitalism as an engine of progress. To guarantee that the industriels (businessmen, entrepreneurs and ‘non-idlers’ more generally) could succeed in their enterprises, their pursuits did not have to be given free reign. Rather, government would have to be transformed by these actors themselves. Technical and scientific experts, along with a few artists, would be selected to form a governing council. This organisation would make international harmony possible because science supposedly knew no loyalties and no politics. Second, Saint-Simon thought that large-scale engineering projects would play a key role in this transformation. Canals (his disciples were quick to add railroads) would shrink the planet and unite peoples. Third, Saint-Simon always attached spiritual hopes to his plans. To this extent at least, his final work The New Christianity (1825), often seen as a departure from his embrace of technology and science, was a kind of more systematic account of the spiritual driving forces that he had always thought a science-led future required. 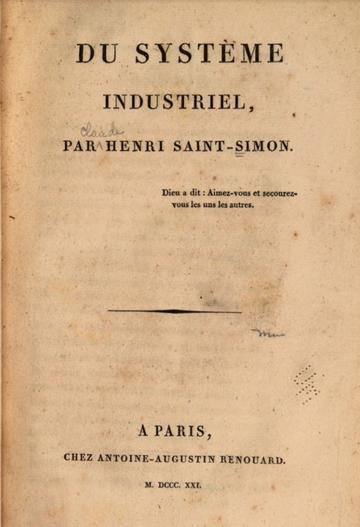 Crucially, Saint-Simon’s technocratic internationalism aimed to offer a definitive escape from politics. To this end, he theorized that international order ought to be a conceptual space existing outside of politics, which could be governed from a position of apolitical detachment based on technical-scientific credentials.  Yet problematically, Saint-Simon’s understanding of a neutral, technocratic international sphere took existing social, economic, and racial hierarchies for granted. To some extent, Saint-Simon may have merely been pandering to the French authorities whose favour he struggled to secure. He may have dressed up projects for French national-imperial glory in the guise of neutrality. Nevertheless, Saint-Simon’s aspirations for a technocratic world remained a persistent theme throughout his writings. More than his socialism, this was what the Saint-Simonians made of their patron-saint: leading Saint-Simonians, foremost amongst whom were Prosper Enfantin and Michel Chevalier, would promote mega-projects from the Suez Canal to the Channel Tunnel to the French imperial railroads in Algeria. 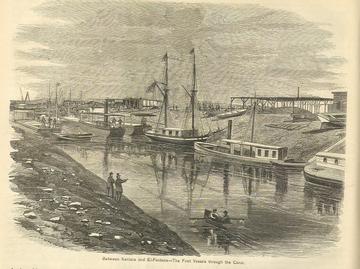 Engraving of the Suez Canal between Kantara and El-Fedane in 1869. The first vessels through the Canal.

Reading Saint-Simon as a technocratic internationalist suggests a more complex picture of technocracy than either functionalist theories of politics or their anti-technocratic critiques convey. Saint-Simon’s technocracy relied on a faith placed in engineers and scientists as the avant-garde of progress and civilisation; and its deep voluntarism drew on spiritual appeals to agency, mission, and perfectibility. A technocratic-internationalist interpretation is promising also because it might resolve existing tensions between the various ‘Saint-Simons’ out there. His spiritual final work The New Christianity, for example, can be read as an ideological grounding of his earlier rationalist proposals for councils of experts. Recognising these linkages, and technocratic internationalism as a significant intellectual current of the nineteenth century more generally, should thus be of great interest to intellectual historians, political theorists, and international relations scholars alike.

Jan Eijking is reading for a DPhil in International Relations at Balliol College, Oxford