The English Revolution and the History of Majority Rule

Over 120 years ago the legal historian F.W. Maitland remarked that ‘one of the great books that remain to be written is The History of the Majority.’ He also realized why this book had not yet been written. ‘Our habit of treating the voice of the majority as equivalent to the voice of an all is so deeply engrained,’ he wrote, that we ‘hardly think that it has a history. But a history it has.’ Today national, elected representatives in democracies make important decisions by enumerated majority vote all over the globe, and we still make little of it. This way of deciding together is in a sense merely a procedure. But it is also the defining feature of these political systems. It is the way democracies decide. By contrast, prior to the modern era, as Maitland seemed to realize, humans mostly made important decisions in national, representative bodies by forging consensus. Conflict was often present, of course, but it was ultimately suppressed prior to the moment of decision.

Arguably the crucial episode in the turn from consensus decision-making to majority rule as a global standard—at least in popular, national, representative bodies—occurred in England during late 1642 and early 1643. As the English people met each other on battlefields, their representatives in the House of Commons were waging civil war by other means. The House of Commons had found itself paralyzed by the excruciating choice between continued bloodshed and significant concessions in their peace negotiations with Charles I. Under these conditions, the members of Parliament grudgingly and repeatedly decided to accept persistent disagreement instead of working to eliminate it. They abandoned their cherished tradition of consensual decision-making and began to resort repeatedly to enumerated majority votes. 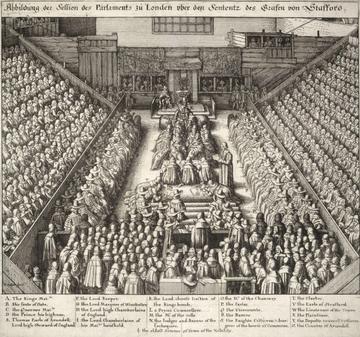 Wenceslaus Hollar, broadside engraving of the trial of the Earl of Strafford, 1641, British Library.

This transformation was structured by the well-known obsession with status that characterized the elites of early modern Europe. Consensual decisions had always been deeply valued in the Commons because they were taken to be essential to the honor of the House, its members, the Parliament, and the monarchy. In contrast, the status implications of divisions (the apt English term for enumerated votes in the Commons) were harrowing. They signified disunity, corruption, untruth, and ultimately, weakness. Yet just a few months after the outbreak of the Civil War, members of Parliament were regularly forced to make particular decisions whose stakes with regard to status clearly trumped the ordinary status considerations built into every question put to them. When two factions found themselves at odds with each other in such situations, they were willing to resort to majority votes to end the standoff. By the spring of 1643, the Commons was resorting to divisions as often as a modern legislature. Enumerated majority votes had been held prior to that moment, of course, in England and elsewhere. But arguably, not since antiquity had they been held with frequency by a popular, national assembly. As the House resorted again and again to protecting its status in emergencies by dividing, Parliament’s status became detached from the achievement of consensus and attached to its ability to repel external threats to its authority. Accordingly, aggressively partisan tactics no longer seemed so dishonourable.

This revolution in practice turned out to be a permanent one, outliving England’s mid-century constitutional revolution and indeed becoming institutionalized shortly following the restoration of the monarchy in 1660. Just as significantly, over the course of the seventeenth and eighteenth centuries, every elected colonial assembly in Britain’s Atlantic empire, from Ireland to Georgia, followed suit. In the colonies, the rise of majority rule occurred more quickly and quietly than in England. In terms of both conventional practices and political status, less was at stake in the transition. This was true in a variety of senses, and the details are dependent upon the particulars of the colony in question. Most American assemblies and their procedures simply became institutionalized after Parliament itself had abandoned consensual decision-making, rendering the move uncontroversial. The assemblies founded before the pivotal developments in England were also inclined to majoritarianism, but for different reasons. The corporate and proprietary traditions according to which so many of these assemblies were originally governed were more conducive to majority rule than the original parliamentary tradition. Representatives ended up strongly beholden to the initial wishes of their constituents, limiting room for free deliberation and compromise in the assemblies. Moreover, until well into their institutional lives, these assemblies were relatively impotent and insignificant. This rendered their operation less subject to status considerations. Finally, the members of these assemblies normally lacked the rhetorical and dialectical skill necessary for building consensus that one sees in the English case.

These Anglo-American developments turned out to be pivotal events in world history, ensuring that the two greatest powers of the modern world—the United Kingdom and the United States—would be majoritarian powers. This itself ensured that when the former colonies, dependencies, and defeated enemies of Britain and America took their own democratic turns in the half-century after World War II, they were overwhelmingly likely to take majoritarian turns as well. The globalization of the majority and the globalization of democracy went hand in hand.

Despite all this, aside from the late Mark Kishlansky, the only scholars to have stressed the importance of seventeenth-century England in the history of majority rule have been political theorists, who since the 1980s have occasionally spoken of what Jane Mansbridge called an ‘adversary revolution’ in English political thought. This raises the question of the relationship between the story sketched here, which is largely a story of practices, and intellectual history. The basic point to be made here is that political practices led the way. Majoritarian practices proliferated in the Commons before the English generally embraced normative defenses of it. Some have looked, for instance, to John Locke’s Second Treatise on Government, written in the winter of 1679-80, for the most important early, full-throated defense of majority rule in Parliament in English political thought. Whatever the truth of this judgment, it is clear that in the Second Treatise Locke was simply accepting and universalizing an institutionalized practice. 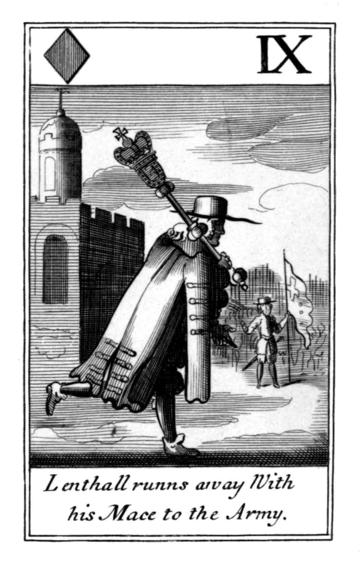 “Lenthall runs away with his mace to the army,” satirical playing card, Restoration period, Wikimedia Commons.

For all its dependency upon evolving political practices, the history of the discourse on majority rule in revolutionary England is certainly of interest. Contemporaries immediately responded in print to the collapse of consensus politics in Parliament. This response was led by Charles I himself and a cadre of public supporters, who offered a multifaceted critique of majority rule that anticipated most modern discourse on the subject. Even more notable, perhaps, were the defenses of majority rule that occasionally began to appear on the parliamentarian side. These arguments were proffered by very well-known parliamentarian lawyers and propagandists, including Henry Parker and William Prynne. And over the course of the decade, the question of majority rule in Parliament was addressed by many of the best-known English and Scottish writers on political affairs. After the early years of the war, majoritarianism became broadly associated with Presbyterian propaganda, bolstering the Presbyterians’ long-successful attempt to control Commons proceedings. At the same time, Independents inherited and expanded upon what had originally been royalist critiques of majority rule as a species of corruption and tyranny. Ultimately both civilian Independents and the New Model Army championed anti-majoritarian discourse in order to support their purge of Parliament in 1648 and legitimate the Revolution itself.

We ought not conclude from the English example, however, that formal discourse always lagged behind other practices in the global history of majority rule. In the highly institutionalized context of the early modern English Commons, where there already existed both a tradition of consensual practices and a majoritarian procedural option (the division), an institutional transformation was easily accomplished without profound intellectual work. But we need only to look to the next major moment in the global history of majority rule in representative assemblies—the French Revolution—to realize that the relationship between ideas and action could vary considerably. 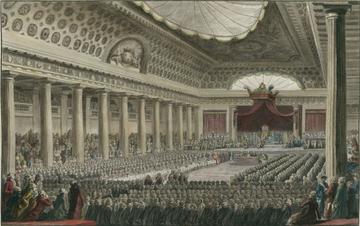 Isidore-Stanislaus Helman, engraving of the opening of the Estates General, 1789, British Library.

The Estates General that met in 1789 was a radically de-institutionalized occasion for a variety of reasons, most obviously because it had not met since 1614. As a result, the question of basic constitutional and procedural design was forced to the forefront of politics. The effects of this structural situation were first reflected in the hundreds of pamphlets and petitions that began to address the issue of voting in the Estates General (and in elections to it) after Louis XVI himself solicited this public commentary in July 1788. (It is less clear, however, that the pre-revolutionary commentaries of Jean-Jacques Rousseau and the marquis de Condorcet on the subject had a similarly direct impact on political practice.) When the Estates General met in May 1789, it immediately instituted enumerated majority voting, first within the Estates and then within the National Assembly. While the precise nature of this development still remains unclear, what is for certain is that despite some important similarities, the rise of majority rule in France, which would itself have global repercussions, followed a very different course from its English predecessor.