Enlightenment Studies at Oxford: Intellectual History Across the Disciplines

Ever since the 1950s, Oxford-based authors have pondered the difficult ambiguity and polysemy of the term ‘Enlightenment’. In the process they produced a remarkable amount of original research, accompanied by a critical mass of controversy and debates. This short blog post focuses (in very broad brush strokes) on the history of Enlightenment studies at Oxford and on present, interdisciplinary research. A major engine of Enlightenment studies at Oxford since the 1970s has been the Voltaire Foundation, a unique institution that is currently being transformed into a full-scale, international research hub in the field. 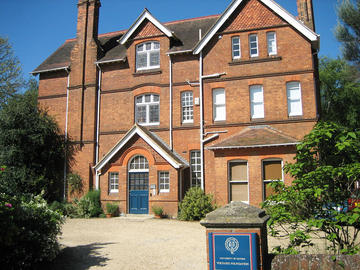 Outside academic circles, Isaiah Berlin is arguably the Oxford figure most widely associated with the Enlightenment. In his early anthology The Age of Enlightenment, publications on Vico, Herder, and Hamann, and a renowned essay on the Counter-Enlightenment at the outset of his book Against the Current, Berlin presented to the public an image of Enlightenment that more recent research has thoroughly undermined. Berlin’s Enlightenment was a monistic movement infatuated with reason, seeking to apply one set of rational and universalist answers to the disparate questions of morality, social organisation, and the natural world. His small set of Enlightenment authors were derisive (or ignorant) of sentiment, regional varieties of culture and opinion, and the fact that human experience is embedded in particular languages and historical experience. This excessively rationalist Enlightenment in France and Britain was contrasted by Berlin with a mostly German Counter-Enlightenment, a proto-historicist movement fully attuned to cultural difference. As suggested by contributors to a recent Oxford-based reassessment of Berlin’s Enlightenment (and an earlier volume on the so-called Counter-Enlightenment), this view of 18th-century philosophy had been heavily moulded by ideological accounts of Enlightenment, produced mostly in Germany in the late 19th-century and the early 20th. Berlin himself used such ideas for his own purposes: he cast the Counter-Enlightenment as the unexpected origin of the value pluralism he promoted in the context of the Cold War. 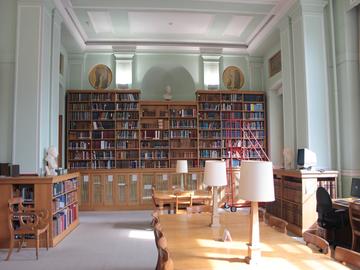 Yet in parallel to Berlin’s dichotomous distinction between Enlightenment and its ‘Other’, and perhaps less visible to the broader public, pioneering research on 18th-century intellectual history was conducted at different Oxford faculties. Robert Shackleton, Bodley’s Librarian and Marshal Foch Professor of French Literature, published in 1961 a groundbreaking critical biography of Montesquieu. As noted by Giles Barber (head of the Taylorian Library, and himself a distinguished historian of the 18th-century book), Shackleton's identification of Montesquieu's different scribes and his painstaking research contributed to the resurgence of Montesquieu studies in both French and English from the 1970s onwards. In 1967 Hugh Trevor-Roper, Oxford’s Regius Professor of History, published two essays that anticipated (perhaps serendipitously) major trends in Enlightenment studies over the following decades. ‘The Religious Origins of the Enlightenment’ argued that the 18th-century Enlightenment was neither a movement fully opposed to religion nor an outgrowth of Calvinism (a common hypothesis at least since Hegel). According to Trevor-Roper, the main ideas of the Enlightenment derived from theological currents that had preceded Calvin and at times destabilised orthodox Calvinism – originating, above all, in the writings of Erasmus. Modern research on the religious aspects of Enlightenment seems more in tune with Trevor-Roper’s broad thesis (if not necessarily with its detail) than with Peter Gay’s portrayal, in 1966, of the Enlightenment as ‘the rise of modern paganism’ (at Oxford, see work by Brian Young and Rob Iliffe). Controversial as some of its arguments were, Trevor-Roper’s second essay of 1967, ‘The Scottish Enlightenment’, set the tone for a flourishing sub-field focused on Scottish political economy, conjectural histories, and the ‘science of man’.

The essay on the Scottish Enlightenment was originally published in Studies on Voltaire and the Eighteenth Century (SVEC), the book series created by Theodore Besterman in 1955. Besterman also established the Institut et Musée Voltaire in Geneva, forerunner of the present Voltaire Foundation, designed as an institutional and intellectual home for various publications, including the first complete edition of Voltaire’s writings. Besterman moved to Oxfordshire in the early 1970s, and on his death in 1976, the Voltaire Foundation passed by bequest to the University of Oxford, with a mission to continue the publication of the series he had founded, and to promote research on the Enlightenment more broadly. From its earliest beginnings, it fostered international collaboration in the field: Besterman was also the founder of the International Society for Eighteenth-Century Studies (ISECS), whose activities have been closely linked to the Voltaire Foundation since its first congress in 1963. 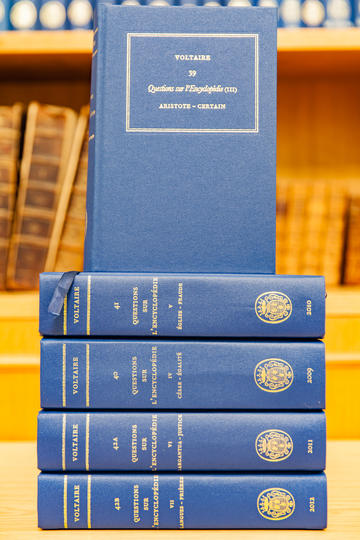 53 years after its inception, the mammoth project of gathering all of Voltaire’s writings and publishing them with a full scholarly apparatus is nearing completion, under Nicholas Cronk’s leadership, in 203 volumes. The final volume of the Œuvres complètes de Voltaire, to be published later this year, is fittingly focused on Voltaire’s complex relationship with England. The conclusion of this magisterial edition does not, however, signal an end to the Voltaire Foundation’s editing and publishing enterprise. Already 20 years ago, the Voltaire Foundation led Oxford’s Electronic Enlightenment project, linking online the complete correspondences of major Enlightenment authors. More recently, it has been developing the Voltaire Lab and Digital Enlightenment, an editorial tool for born-digital publications, and projects such as Tout d’Holbach (in collaboration with Chicago’s ARTFL). Among its other publications over the last few decades are scholarly editions of the correspondences of Jean-Jacques Rousseau and several other major authors, among them Pierre Bayle and Françoise de Graffigny.

For early career researchers working on Enlightenment-related topics, the activities sponsored by the Voltaire Foundation offer an interdisciplinary forum for intellectual exchange and sociable interaction – from the recent hackathon to the Enlightenment Workshop research seminar (see Joanna Innes’s account of a recent session). The Enlightenment Workshop was initially directed by two Oxford experts in the field: Laurence Brockliss, who examined the relationship between the provincial Republic of Letters and mainstream Enlightenment, and John Robertson, who made the case for a cross-European perspective on 18th-century discussions of improvement and political economy. Over the last 20 years the Voltaire Foundation has also been hosting an annual Besterman Lecture in honour of its founder: the next speaker, in November 2021, is Sophia Rosenfeld of the University of Pennsylvania. 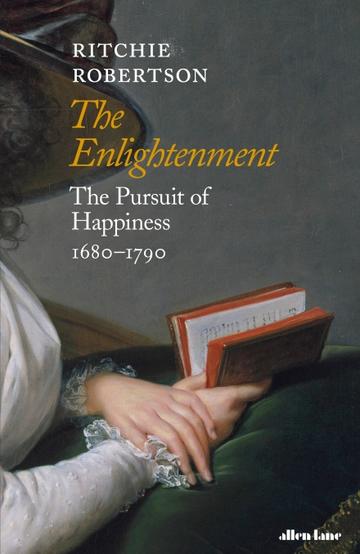 Since the early days of Shackleton and Trevor-Roper, the Voltaire Foundation has been promoting collaboration in Enlightenment studies, providing a much-needed aegis beyond the usual faculty structure. This interdisciplinarity is a hallmark of Enlightenment studies at Oxford today. Over the last few years, colleagues at the Modern Languages Faculty have published a new interpretation of the Enlightenment across Europe, an original analysis of an understudied work by Diderot, digital readings of 18th-century correspondence, and editions of the letters of Catherine the Great and Marie-Antoinette, to mention but a few items. Research at the Department of Politics and International Relations has resulted in a new biography of Toussaint Louverture, leader of the Haitian slave revolt, and a study of radical republicanism from the early modern period to the present. At the English Faculty, long-lasting interest in Edward Gibbon and Samuel Johnson has led to the publication of new editions and edited volumes over the last few years; another line of research has examined how theatrical plays and caricatures interacted with 18th-century literary and philosophical genres. In the History Faculty, new publications include studies of the Republic of Letters and the history of knowledge and erudition (see Dmitri Levitin’s blog post), as well as an edition of Frederick the Great’s writings, offering a new interpretation of his philosophy. 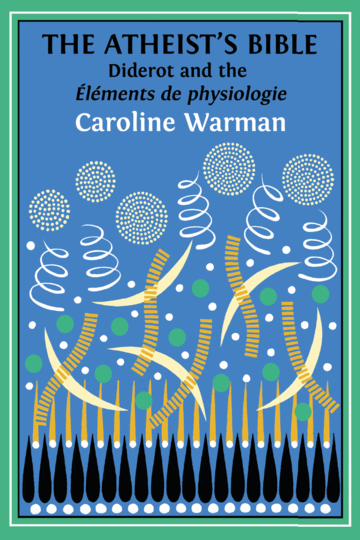 The Voltaire Foundation’s book series has recently been renamed Oxford University Studies in the Enlightenment. The new title better reflects the aims of the series, which maintains its unique bilingual character: promoting the study of Enlightenment far beyond Voltaire, France, and even Europe. The series has stood at the forefront of Enlightenment studies for decades, having issued more than 600 volumes to date, all recently digitised and available online. Some of its most recent books deal with European links with 18th-century Persia, representations of colonialism and slavery, and one of the first documented cases of transsexual transitioning, while opening up new perspectives on well-known figures such as the Abbé Saint-Pierre, Catherine the Great, and Giambattista Vico.

Looking to the future, Oxford will continue to draw on this collaborative and interdisciplinary mode of research – not only within the University but also internationally, especially at a time of increasing political fragmentation. The Voltaire Foundation co-ordinates the UK section of the new Oxford-Berlin Enlightenment Hub (part of the broader Oxford-Berlin Partnership), and develops partnerships with further research institutions abroad, among them CELLF at the Sorbonne and the Enlightenment Research Centre at the University of Halle (IZEA). The interaction of intellectual history with the history of the book, literary scholarship, the history of knowledge, and the history of science should remain a distinctive characteristic of Oxford research on the Enlightenment, accompanied by an emphasis on themes such as race (see Morgan Golf-French’s blog post), slavery, and the interrelations between 18th-century European scholarship and forms of local knowledge overseas.

If, some 50-60 years ago, Robert Shackleton, Isaiah Berlin, and Hugh Trevor-Roper worked on diverse aspects of the Enlightenment from different disciplinary perspectives, their legacy is alive and thriving – not least due to the additional synergy provided by the legacy of Theodore Besterman. Today Oxford is one of the global centres of Enlightenment scholarship; colleagues across the University’s faculties would be glad to welcome graduate students from all over the world into this dynamic research culture.